This has pretty much been the forecast for every day this week:

I’m sorta wishing we were investing in a swimming pool instead of fence and pasture.

I know I won’t mean that for long, though.

We tend to take two steps forward and three (or four, or five) back around here.  Pig-farmer worked his rear off Saturday.  The downed-apple tree is now cleaned up as far as we can take it.  The stump will be ground up and removed when we have some other tree-work completed. 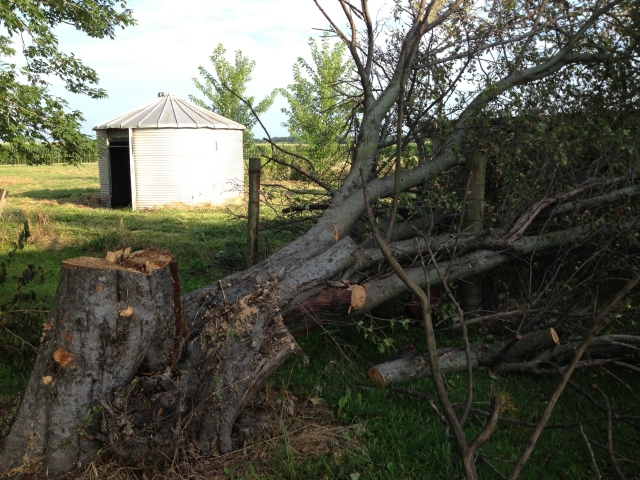 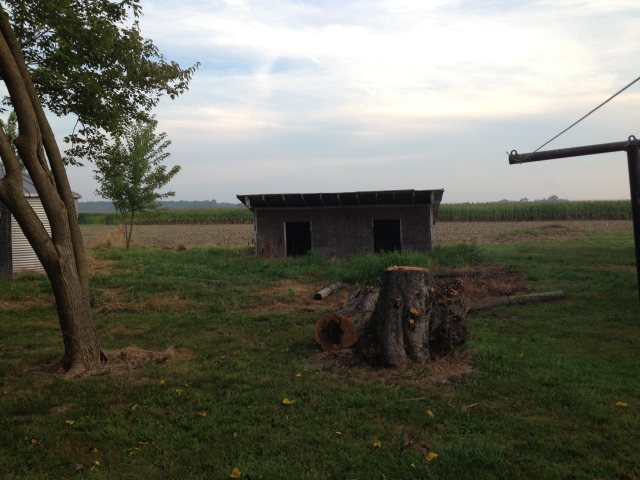 Everything is now ready for the fence-building to begin!

Pig-farmer also stocked us up on hay: 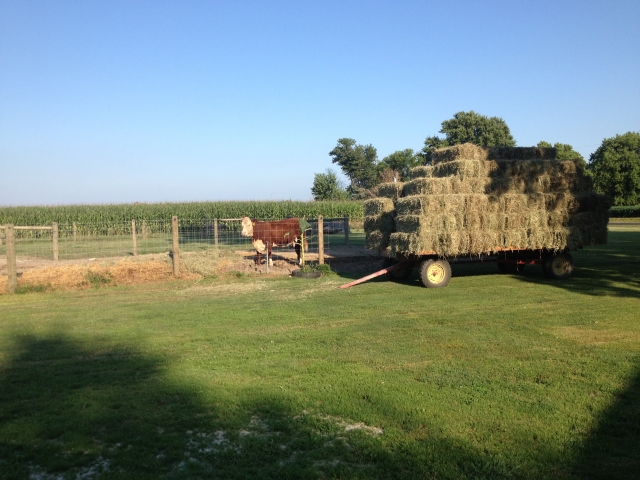 I would like to say I helped unload all that hay.  I attempted to help.  We chose to unload it in the evening (which, considering the heat, made perfect sense) … after I ate a ridiculous amount of Chinese-restaurant takeout (which did not make perfect sense).  I did climb atop the wagon and throw some of the bales down for pig-farmer.  After listening to me moan and groan he suggested that he would finish the job by himself.

That was the “two steps forward.”  The “three steps back” were that my husband’s (he’s only pig-farmer when he’s working at home) aunt passed away after a brief fight with cancer.  From bad things can come good as he/we really appreciated spending time with family.

The ground-work for seeding the pasture resulted in the new septic’s line damage … as I said before about the whole dastardly septic problem … $#it happens.

Plus, my sick/injured pen is now filled by Hunter, my faithful assistant. 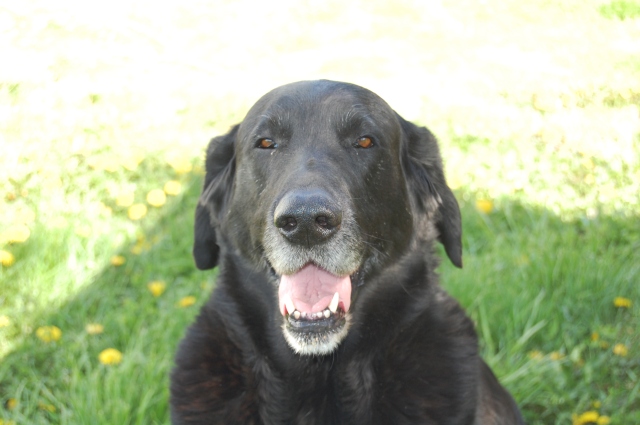 It’s a long story – with a chapter or two still to be written (hopefully) – but he was hit by a truck … and I feel completely, horribly, responsible because he was out with me, while I was on the mower, when it happened.  The poor man that hit him was a jewel and stayed with Hunter while I got the truck and he helped me load him (Hunter is 102 lbs.).  Hunter had one procedure that didn’t work and he’s now recuperating at home (so far – s0 g00d) as we weigh the next option.  He gets his meds and Epsom Salts soaks twice a day, is softly bedded on straw with a fan to help with comfort in the heat, the goats are in the neighboring pen for company … and he is his happy, sweet self.

Through it all – I am thankful for being able to be with family during rough days and also during good times.  My Mom and I went to her cancer check-up Monday.  She got a good report and doesn’t have to report back until November!  I am grateful for the time I now have to spend with family & friends and to care for Hunter and any animal on our little farm that needs the extra TLC.

This blog documents our farm life in central Illinois with photographs, experiences, and a dash of cooking. Pour a cup of coffee and enjoy sharing part of our lives!
View all posts by Marla Rose →
This entry was posted in Country Living, Friends and Family, Positive Thinking, Work/Career and tagged Country life, family, grateful, hay, Old black lab, Pig-farmer, Polled Hereford, thankful. Bookmark the permalink.

4 Responses to Dog Days of August

An urban homesteading family move to the country; still a story of trial and error...a lot of error!

finding the extraordinary in the ordinary

Recipes showing step by step directions with pictures and a printable recipe card.

Family of five on five acres in Cantrall, Illinois

When Timber Makes One Still

"Everyone needs beauty as well as bread, places to play in and pray in, where nature may heal and give strength to the soul" -John Muir

Just breathe...And trust that you are right where you need to be.

Just Another Day On The Prairie

The diary and musings of an Alberta ranch wife.

Life on the Farmlet

My continuing adventures in North Alabama!

Coopworth Fiber, LaMancha Dairy Goats and Cheese on the Coast of Maine!

Finding the Extraordinary in the Ordinary.

Megan Bugg's journey through cancer as told by her father.

Sharing the often fun, sometimes tragic but always fabulous life in the country!

Getting Kerry'd Away Voiceovers and Blog

these days of mine

Stop in and see what's happening during these days of mine

Life on a Colorado Farm (All Rights Reserved)