Southernruralroute.wordpress.com asked, “How did Happy get ONE zebra stripe?”

I didn’t know, but I knew he wasn’t alone.  My first donkey, Apple Jack, was my first husband’s (Gary) idea.  Apple Jack had a cross.  The two jennies (females) we purchased later, had crosses, as did their offspring.

Now, regarding that “zebra stripe.”  I did know that donkeys can be crossed with zebras, resulting in zonkeys.  I kid you not.  Here’s a pic from the internet:

Again, I still didn’t know how/why the stripe.  This is what I found from First Mainland Donkey and Mule Club News:

Only standard and miniature donkeys have a cross and stripe, mammoths do not. The cross is a dorsal stripe of darker hair down the length of the back crossed by a shoulder stripe across the top of the body at the withers. There is a legend that the cross on the back of the donkey is the shadow of the cross as the donkey stood at the foot of the cross when Jesus died.

I climbed up on Happy’s gate to get an “aerial” photo of his cross.  He obliged by biting me on the foot…. Anything for the picture. 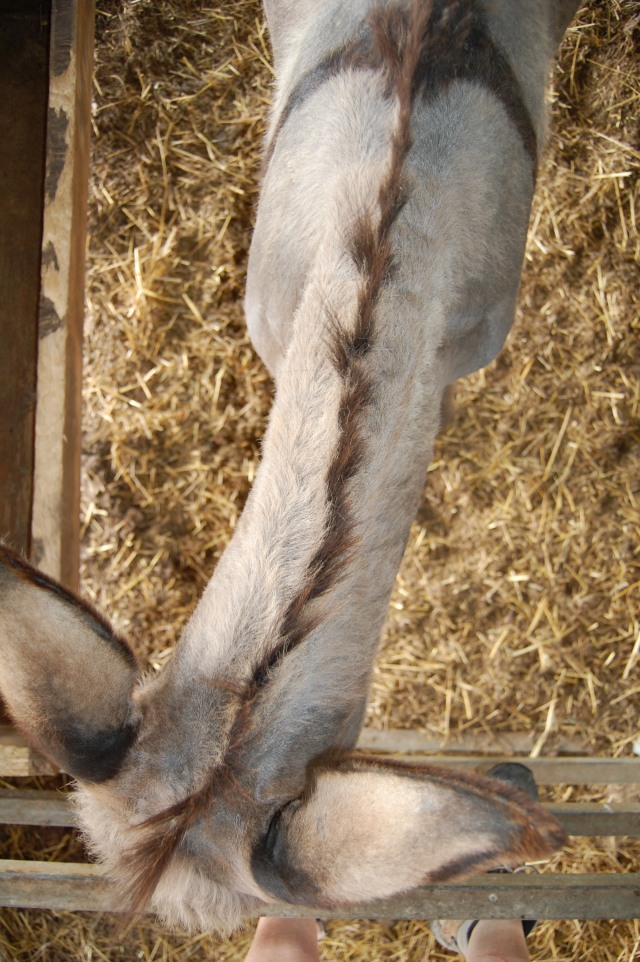 As with other questions I do not have a completely full answer for, I just say,

Thanks for the questions!

This blog documents our farm life in central Illinois with photographs, experiences, and a dash of cooking. Pour a cup of coffee and enjoy sharing part of our lives!
View all posts by Marla Rose →
This entry was posted in Positive Thinking and tagged donkeys, Donkeys' cross, Happy Ass Farm, Happy the donkey. Bookmark the permalink.

14 Responses to A donkey’s cross

An urban homesteading family move to the country; still a story of trial and error...a lot of error!

finding the extraordinary in the ordinary

Recipes showing step by step directions with pictures and a printable recipe card.

Family of five on five acres in Cantrall, Illinois

When Timber Makes One Still

"Everyone needs beauty as well as bread, places to play in and pray in, where nature may heal and give strength to the soul" -John Muir

Just breathe...And trust that you are right where you need to be.

Just Another Day On The Prairie

The diary and musings of an Alberta ranch wife.

Life on the Farmlet

My continuing adventures in North Alabama!

Coopworth Fiber, LaMancha Dairy Goats and Cheese on the Coast of Maine!

Finding the Extraordinary in the Ordinary.

Megan Bugg's journey through cancer as told by her father.

Sharing the often fun, sometimes tragic but always fabulous life in the country!

Getting Kerry'd Away Voiceovers and Blog

these days of mine

Stop in and see what's happening during these days of mine

Life on a Colorado Farm (All Rights Reserved)